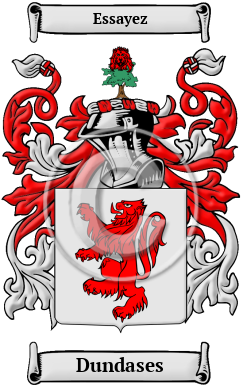 Early Origins of the Dundases family

The surname Dundases was first found in West Lothian. It is generally believed that the surname was acquired when Helias, son of Uctred secured the lands of Dundas from Waldeve, son of Gospatric through a charter agreement during the reign of Malcom IV. The document fails to list the precise date of the charter, though the time of the transaction is confirmed by alternative supporting evidence. A saying made famous among respective Clan members is recorded as follows: "any prime minister can raise a man to the House of Lords, but it takes seven centuries of Scottish history to make a Dundas of Dundas." Some of the family held estates at Aske, in the North Riding of Yorkshire in later times. "Aske Hall, one of the seats of the Earl of Zetland, is a spacious and elegant castellated mansion, situated on rising ground in a large and beautiful park, and embosomed in noble woods of fine old timber, and pleasure-grounds of varied surface: many of the views from the residence are of striking beauty. The noble earl's inferior title is Baron Dundas of the manor of Aske, conferred in 1794." [1]

Early History of the Dundases family

This web page shows only a small excerpt of our Dundases research. Another 151 words (11 lines of text) covering the years 1126, 1296, 1488 and 1875 are included under the topic Early Dundases History in all our PDF Extended History products and printed products wherever possible.

More information is included under the topic Early Dundases Notables in all our PDF Extended History products and printed products wherever possible.

Migration of the Dundases family to Ireland

Some of the Dundases family moved to Ireland, but this topic is not covered in this excerpt. More information about their life in Ireland is included in all our PDF Extended History products and printed products wherever possible.

Migration of the Dundases family