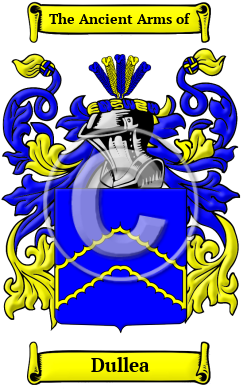 It is generally thought that the surname Dullea is derived from the Irish O Dubhalla sept of Muskerry, Cork. It has also been suggested that Dullea comes from a branch of the famous MacDuinnsleibhe sept. However, since the MacDuinnsleibhe sept was located in Ulster and bearers of the name Dullea were for the most part located in the south western counties of Munster, this connection seems rather unlikely.

Early Origins of the Dullea family

The surname Dullea was first found in the south western counties of Munster, where the name dates back to sixteenth century Fiants in County Cork. These records include mention of Donell and Owen MacDermodie O'Donlegh, who along with many other men of Cork, were pardoned in 1586.

Early History of the Dullea family

This web page shows only a small excerpt of our Dullea research. Another 68 words (5 lines of text) covering the years 1659, 1664, 1666, 1704 and 1725 are included under the topic Early Dullea History in all our PDF Extended History products and printed products wherever possible.

Another 33 words (2 lines of text) are included under the topic Early Dullea Notables in all our PDF Extended History products and printed products wherever possible.

Dullea migration to the United States +

Dullea Settlers in United States in the 19th Century