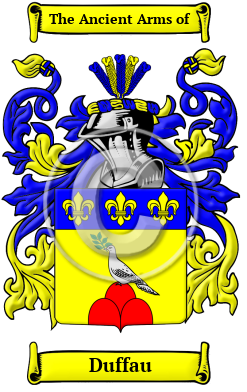 Early Origins of the Duffau family

The surname Duffau was first found in Périgord, where this renowned family held a family seat since ancient times.

Early History of the Duffau family

Notable amongst the name at this time was Guillaume de Fages, Lord of Tauriès; Guillaume Dufay (Du Fay, Du Fayt; c. 1397-1474), was a Dutch composer of the early Renaissance; and Raymond Lafage (1656-1684), a Baroque French artist, best known for his mythological prints and drawings. François Joseph Marie Fayolle was born in Paris Aug. 15, 1774. After a brilliant career at the Collège de Juilly, he entered the corps des ponts et chaussées in 1792, and became...
Another 76 words (5 lines of text) are included under the topic Early Duffau Notables in all our PDF Extended History products and printed products wherever possible.

Migration of the Duffau family

Some of the first settlers of this family name or some of its variants were: Peter Fage settled in Georgia with his wife, Martha, his son, Anthony, and his daughter, Mary, in 1733.