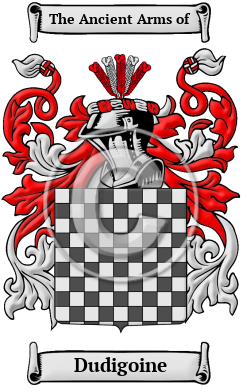 Early Origins of the Dudigoine family

The surname Dudigoine was first found in Burgundy (French: Bourgogne), an administrative and historical region of east-central France where the family has been traced from early times.

Early History of the Dudigoine family

Notable amongst the family at this time was Guillaume Digoine, Crusader Knight; Robert, Chamberlain of the Duke of Bourgogne; Claude Digoine du Palais, Commander of Malta, Squadron Leader. John Dygon (fl. 1512), was a Benedictine monk and musician who was admitted bachelor of...
Another 41 words (3 lines of text) are included under the topic Early Dudigoine Notables in all our PDF Extended History products and printed products wherever possible.

Migration of the Dudigoine family

Some of the first settlers of this family name or some of its variants were: Timothy F. Diggin settled in Philadelphia in 1873.