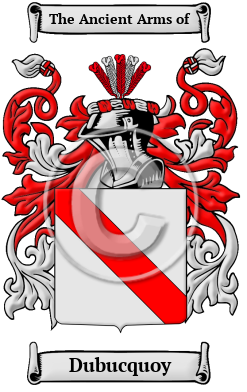 Early Origins of the Dubucquoy family

The surname Dubucquoy was first found in Normandy (French: Normandie), the former Duchy of Normandy, where the family first originated and maintained their status as one of the more distinguished families of the region.

Early History of the Dubucquoy family

Notable amongst the family in this period was Louis, adviser to the King; Julien Dubuque (1762-1810), first settler of European descent in Iowa; Julien Edouard Alfred Dubuc, resident of Chicoutimi, Quebec, he was born in 1871 and was the former president and managing director of the North American Pulp & Paper Companies. He also received the title of Knight of the...
Another 61 words (4 lines of text) are included under the topic Early Dubucquoy Notables in all our PDF Extended History products and printed products wherever possible.

Migration of the Dubucquoy family