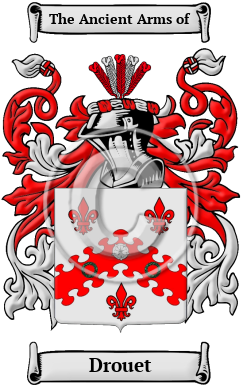 Early Origins of the Drouet family

The surname Drouet was first found in Oxfordshire where Walter Druet was listed as a Knights Templar in 1185. A few years later, William Drauet was listed in the Pipe Rolls for Kent in 1198 and later again, Walter Drywet was found in Sussex in 1309. The English name is derived from the Old French word Dru which literally means "little sweetheart." [1]

Early History of the Drouet family

Distinguished members of the family include John Drout (fl. 1570), English poet and as we learn from the title-page of his only known work, an attorney of Thavies Inn. He is author of a black-letter tract of thirty leaves, entitled ‘The pityfull Historie of two louing Italians, Gaulfrido and Barnardo le vayne, which ariued in the countrey of Grece, in the time of the noble Emperoure Vaspasian. And translated out of Italian into Englishe meeter,’ &c., 12mo, London, 1570. In dedicating ‘this, the first frutes of my trauell,’ to Sir Francis Jobson, knt., lieutenant of the Tower, Drout mentions his parents...
Another 162 words (12 lines of text) are included under the topic Early Drouet Notables in all our PDF Extended History products and printed products wherever possible.

In France, the name Drouet is the 499th most popular surname with an estimated 8,956 people with that name. [5]

Drouet Settlers in Canada in the 17th Century

Drouet Settlers in Canada in the 18th Century