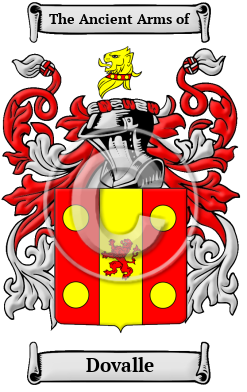 Early Origins of the Dovalle family

The surname Dovalle was first found in Sussex where "the first mention we meet with regarding the descendants of this knight is in the reign of henry I. when Nigel de Albini, being enfeoffed by the crown of the manor of Egmanton, Notts, conferred it upon Robert D'Eivill, who appears to have been ancestor of John D'Eivill, Governor of York Castle, a potent Baron of the time of Henry III., and one of the most active against the Royal Cause. " [4]

Early History of the Dovalle family

More information is included under the topic Early Dovalle Notables in all our PDF Extended History products and printed products wherever possible.

Dovalle migration to the United States +

Dovalle Settlers in United States in the 19th Century

Dovalle Settlers in West Indies in the 18th Century