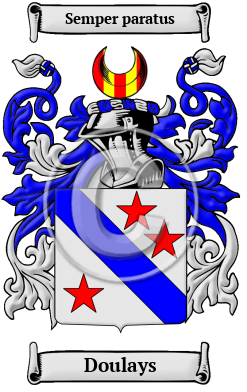 An ancient Pictish-Scottish family was the first to use the name Doulays. It is a name for someone who lived in a place named Dallas in Moray, near the royal burgh of Forres. The place name Dallas comes from the Gaelic dail or "meadow," and fas or "dwelling." Another source claims "this place takes its name from the two Gaelic words dale, a vale or plain, and uis, contracted from uisge, water." [1]

Early Origins of the Doulays family

The surname Doulays was first found in Moray. "The first of the family was Willelmus de Rypeley, an Englishman, who obtained a grant or confirmation of the lands of Dolays Mykel from William the Lion. Archebaldus de Doleys appears as juror on an inquisition on the lands of Mefth in 1262." [2] Sir William de Doleys, knight, was living in 1286; and in 1367 appears John de Dolais, Thane of Cromdale.

Early History of the Doulays family

During the Middle Ages, there was no basic set of rules and scribes wrote according to sound. The correct spelling of Scottish names were further compromised after many haphazard translations from Gaelic to English and back. Spelling variations of the name Doulays include Dallas, Doleys, Dolas, Dolles, Dulles, Dallass, Dolays, Dalhouse and many more.

Notable amongst the Clan at this time was Sir Robert Dallas, SL, KC (1756-1824) an English judge, Chief Justice of the Common Pleas, the eldest son of Robert Dallas of Cooper's Court, St. Michael's, Cornhill. Alexander Robert Charles Dallas (1791-1869)...
Another 39 words (3 lines of text) are included under the topic Early Doulays Notables in all our PDF Extended History products and printed products wherever possible.

Migration of the Doulays family to Ireland

Some of the Doulays family moved to Ireland, but this topic is not covered in this excerpt.
Another 73 words (5 lines of text) about their life in Ireland is included in all our PDF Extended History products and printed products wherever possible.

Migration of the Doulays family

Scots left their country by the thousands to travel to Australia and North America. Desperate for freedom and an opportunity to fend for themselves, many paid huge fees and suffered under terrible conditions on long voyages. Still, for those who made the trip, freedom and opportunity awaited. In North America, many fought their old English oppressors in the American War of Independence. In recent years, Scottish heritage has been an increasingly important topic, as Clan societies and other organizations have renewed people's interest in their history. An examination of passenger and immigration lists shows many early settlers bearing the name of Doulays: Alexander Dallas who settled in Jamaica in 1775; Jacob, John, Joseph, Mathew, Samuel, Thomas, and William Dallas all arrived in Philadelphia, Pennsylvania between 1830 and 1865.