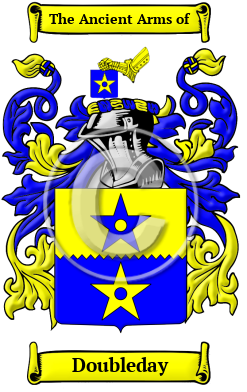 The first people to use the distinguished Doubleday family name were found in the French town of Doublett, in Holland, and was a Huguenot surname. It was brought to England, in the 15th and 16th centuries when the Huguenots fled the homeland because of the religious persecution which threatened their survival there. Under the Protestant King Henri IV, in the late 15th century, the Edict of Nantes was signed, which ended the Wars of Religion, and promised greater tolerance to the non-Catholic sects in France. For the Huguenots, this came as a relief to centuries of marginalization and harassment. Unfortuantely, this Edict was overturned in the 17th century, at which time, many Huguenot families came to England. The Doubleday family settled in the county of Middlesex in England.

Early Origins of the Doubleday family

The surname Doubleday was first found in Middlesex where they held a family seat from early times and their first records appeared on the early census rolls taken by the early Kings of Britain to determine the rate of taxation of their subjects.

Early History of the Doubleday family

This web page shows only a small excerpt of our Doubleday research. Another 36 words (3 lines of text) covering the years 1811, 1849, 1808 and 1875 are included under the topic Early Doubleday History in all our PDF Extended History products and printed products wherever possible.

Huguenot surnames were only slightly Anglicized, and they remain to this day a distinct group of surnames in England. Nevertheless, Huguenot surnames have been subject to numerous spelling alterations since the names emerged in France. French surnames have a variety of spelling variations because the French language has changed drastically over the centuries. French was developed from the vernacular Latin of the Roman Empire. It is divided into three historic and linguistic periods: Old French, which developed before the 14th century; Middle French, which was used between the 14th and 16th centuries; and Modern French, which was used after the 16th century and continues to be in use today. In all of these periods, the French language was heavily influenced by other languages. For example, Old French was infused with Germanic words and sounds when the barbarian tribes invaded and settled in France after the fall of the Roman Empire. Middle French also borrowed heaviliy from the Italian language during the Renaissance. Huguenot names have numerous variations. The name may be spelled Doubleday, Dubleday and others.

More information is included under the topic Early Doubleday Notables in all our PDF Extended History products and printed products wherever possible.

Doubleday migration to the United States +

Discovered in the immigration and passenger lists were a number of people bearing the name Doubleday:

Doubleday Settlers in United States in the 17th Century

Doubleday Settlers in United States in the 19th Century