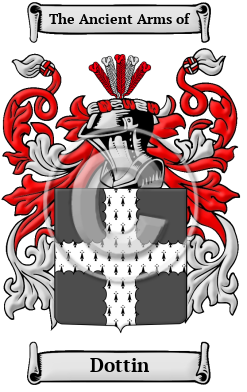 Early Origins of the Dottin family

The surname Dottin was first found in Devon at Dotton, which was listed as Otrit in the Domesday Book of 1086. At that time, there was land enough for 2 ploughs and comprised about 2 acres of meadow and 10 acres of pasture. It was held by Baldwin the Sheriff. The village or parish has since been lost but the family name was first referenced in the year 1240 when William de Dotton held estates there. Dotton is also listed in Somerset about the same time as a mill on the River Otter and this mill continued in operation from about 1100 through 1960 when it was demolished. Dotton, Somerset is now little more than a farm about 4.5 miles (7.2 km) from the mouth of the Otter.

Early History of the Dottin family

Spelling variations of this family name include: Dotton, Dotten, Dottin, Doten and others.

Distinguished members of the family include William Dotton who was listed as a canon on 21 July 1539. Edward Doty (c. 1599-1655) was a passenger on the historic 1620 voyage of the Mayflower as a servant...
Another 35 words (2 lines of text) are included under the topic Early Dottin Notables in all our PDF Extended History products and printed products wherever possible.

Dottin migration to the United States +

Dottin Settlers in United States in the 20th Century

Dottin Settlers in West Indies in the 17th Century