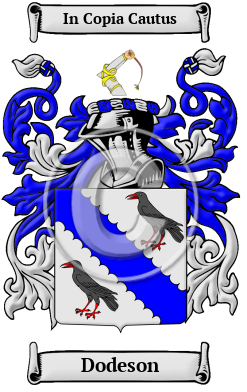 Early Origins of the Dodeson family

The surname Dodeson was first found in Cheshire, but "there appears to be no post-Conquest traces of the [ Domesday Book reference of] Dodeson; the modern Dodson is due to a simplification of the medial 'dgs' or Dodgson." [1]

There is no doubt that the "son" suffix denoted a patronymic extension of the root name "Dodd" or "Dodge." In the case of the former, Dodd is derived from the "Middle English personal name Dode, Dudde, Old English Dodda, Dudda, which remained in fairly widespread and frequent use in England until the 14th century." [2]

Early History of the Dodeson family

Prominent amongst the family during the late Middle Ages was Sir Anthony Dod; and Thaddeus Dod (1740-1793), a prominent Presbyterian minister in Western Pennsylvania. He is one of the founders of Washington & Jefferson College. James Dodson (d. 1757), teacher of the mathematics and master of the Royal Mathematical School, Christ's Hospital, is known chiefly by his work on 'The Anti-Logarithmic Canon' and 'The Mathematical Miscellany.' Of his early life nothing is known, except that his contemporary, Dr. Matthew Maty, in his 'Mémoire sur la vie et sur les écrits de M. A. de Moivre,' enumerated Dodson among 'les disciples qu'il a...
Another 220 words (16 lines of text) are included under the topic Early Dodeson Notables in all our PDF Extended History products and printed products wherever possible.

Migration of the Dodeson family to Ireland

Some of the Dodeson family moved to Ireland, but this topic is not covered in this excerpt. More information about their life in Ireland is included in all our PDF Extended History products and printed products wherever possible.

Migration of the Dodeson family

Some of the first settlers of this family name or some of its variants were: Abra Dotson, who came to Virginia in 1663; Laurence Dod who settled in New Hampshire in 1718; Thomas Dod, who settled in Barbados in 1679 with his wife Margaret.