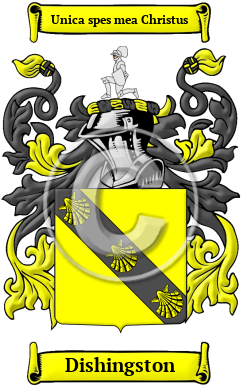 Early Origins of the Dishingston family

The surname Dishingston was first found in Northumberland where they held a family seat as Lords of the manor of Dissington in that shire. They are descended from Dica, and Dicatun which means "Dica's farm." Dissington Hall in North Dissington is a privately owned country mansion which for centuries has been in the hands of the Delaval family. One branch of the family was found at Ashington, again in Northumberland. "The persons who are first named in the records as connected with the property here, are the Morwicks, Lumleys, and Fitzhughs; the family of Essendon (the modern Ashington) are mentioned as lords of the manor at the close of the 13th century." [1]

Early History of the Dishingston family

Notable amongst the family name during their early history was Thomas Dishington of Ardross who received a charter in 1402 from Robert III; John Dishington, one of the Gentleman...
Another 28 words (2 lines of text) are included under the topic Early Dishingston Notables in all our PDF Extended History products and printed products wherever possible.

Migration of the Dishingston family