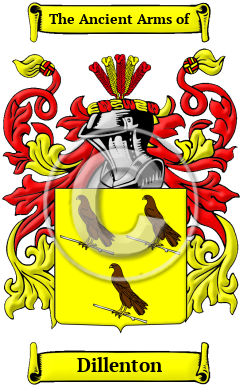 Early Origins of the Dillenton family

The surname Dillenton was first found in Norfolk at Dillington, a hamlet, in the parish of East Dereham, union of Mitford and Launditch, hundred of Launditch. [1]

Here, the name dates back to the Domesday Book of 1086 where it was listed as a tenant of the village and lands of Didlington or Dillington, held by William de Warren, a Norman Baron, who was recorded in the Domesday Book census of 1086. [2]

The Tillinghast variant originated in Sussex at Tillinghurst where the first on record was Ralph de Tellingherst who was listed in the Pipe Rolls of 1230. [3]

Early History of the Dillenton family

Outstanding amongst the family at this time was Sir Robert Dillington, 1st Baronet (ca. 1575-1664), an English aristocrat; John Tillinghast (1604-1655), an English clergyman and Fifth-monarchy man, known for his confrontation with Oliver Cromwell, and millenarian writings; Sir Robert Dillington, 2nd Baronet (ca. 1634-1687), an English politician...
Another 46 words (3 lines of text) are included under the topic Early Dillenton Notables in all our PDF Extended History products and printed products wherever possible.

Migration of the Dillenton family