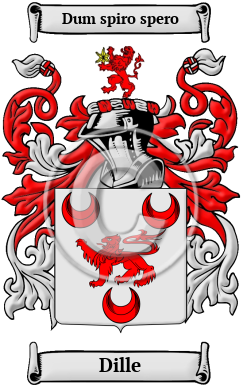 The surname is one of the Anglo-Norman names that arrived in Ireland in the wake of the 12th century invasion by Richard "Strongbow" de Clare, 2nd Earl of Pembroke. The surname Dille belongs to the large category of Anglo-Norman habitation names, which are derived from pre-existing names for towns, villages, parishes, or farmsteads. Originally, these place names were prefixed by de, which means from in French. The name of the Dille family comes from the name of the town of Lyon in central France. In France, the name may also have been a nickname for a fierce or brave warrior, as derived from the Old French word "lion," which meant "lion." The Irish Gaelic form of the surname Dille is Diolún.

Early Origins of the Dille family

The surname Dille was first found in at Drumrany in County Westmeath (Irish: An Iarmhí) in the Irish Midlands, province of Leinster, where they were the Barons of Drumrany. The Dillon family is descended from Sir Henry de Leon, a member of a noble Breton family who came to Ireland in 1185, in the service of the Earl of Morton, who later became King John. For de Leon's service, King John granted him MacCarrons territory, part of Annaly, and other vast possessions, including a castle at Dunimon.

Early History of the Dille family

Church officials and medieval scribes spelled names as they sounded; therefore, single person, could have his name spelt many different ways during their lifetime. While investigating the origins of the name Dille, many spelling variations were encountered, including: Dillon, Delion, Dilune, Dilon, Dylon, Dillan, Dillen and many more.

In the United States, the name Dille is the 14,083rd most popular surname with an estimated 2,487 people with that name. [1]

Dille migration to the United States +

Ireland's Great Potato Famine left the country's inhabitants in extreme poverty and starvation. Many families left their homeland for North America for the promise of work, freedom and land ownership. Although the Irish were not free of economic and racial discrimination in North America, they did contribute greatly to the rapid development of bridges, canals, roads, and railways. Eventually, they would be accepted in other areas such as commerce, education, and the arts. An examination of immigration and passenger lists revealed many bearing the name Dille:

Dille Settlers in United States in the 19th Century