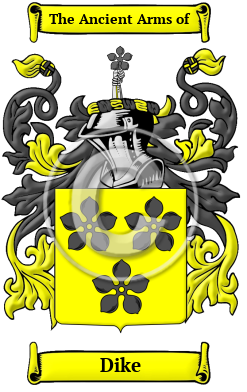 The ancient Scottish name Dike was first used by the Strathclyde-Briton people of the Scottish/English Borderlands. The original bearer of the name lived in Dutton, Lancashire.

Early Origins of the Dike family

The surname Dike was first found in Cumberland, where one reference claims "the name, originally 'Del Dykes,' is derived from the two lines of Roman wall in 'Burgh,' from whence the family at a remote period originated." [1]

Early History of the Dike family

Dike migration to the United States +

Dike Settlers in United States in the 17th Century

Dike Settlers in United States in the 18th Century