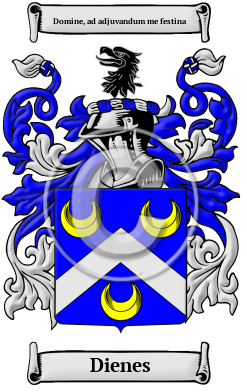 The region of ancient France known as Auvergne is where the name Dienes was born. Dienes was a name for someone who lived in Dienne in Auvergne, a medieval French province on the Massíf Central in the south central part of France. [1]

Alternatively, the name could have come from Dionne, in Burgundy. [2]

Early Origins of the Dienes family

The surname Dienes was first found in Auvergne, a historic province in south central France where this renowned family has held a family seat since ancient times.

By the 17th century, this family were well established in Auvergne and several members of the family were distinctive through their contributions to the community in which they lived and were rewarded with lands, titles and letters patent confirming their nobility. In the 19th century, this honoured family was represented by Count Louis-Edouard-Marie-Hippolyte de Dienne, who was the ancient Flag Lieutenant to Admiral Montaignan.

Antoine Dionne, born in 1641, married Catherine Yvory, born in 1644, in 1660. They settled together on a farm in Sainte-Famille, Quebec, where they had their twelve children. Most of their children eventually settled in Kamouraska and have many ancestors in Canada. [3]

Early History of the Dienes family

This web page shows only a small excerpt of our Dienes research. Another 146 words (10 lines of text) covering the years 1600, 1679 and 1684 are included under the topic Early Dienes History in all our PDF Extended History products and printed products wherever possible.

Most surnames have experienced slight spelling changes. A son may not chose to spell his name the same way that his father did. Many were errors, many deliberate. During the early development of the French language, a person usually gave his version, phonetically, to a scribe, a priest, or a recorder. Prefixes or suffixes varied. They were optional as they passed through the centuries, or were adopted by different branches to signify either a political or religious adherence. Hence, there a many spelling variations of the name Dienes, including Dionne, de Dion, Dion, Dienne, Dione, Diones, de Dionne, de Dienne, Deonne, Dienn, Diennes, Dienes, Dyone, Dyones, Deon, Deons, Deonns, Dyons, Dyon, Dyonne, Dyonnes and many more.

More information is included under the topic Early Dienes Notables in all our PDF Extended History products and printed products wherever possible.

Migration of the Dienes family

Migration from France to New France or Quebec as it was now more popularly called, continued from France until it fell in 1759. By 1675, there were 7000 French in Quebec. By the same year the Acadian presence in Nova Scotia, New Brunswick and Prince Edward Island had reached 500. In the treaty of Utrecht, the Acadians were ceded by France to Britain in 1713. In 1755, 10,000 French Acadians refused to take an oath of allegiance to England and were deported. They found refuge in Louisiana. In 1793, the remaining French in these provinces came under British rule. Meanwhile, in Quebec, the French race flourished, founding in Lower Canada, one of the two great solitudes which became Canada. Many of this distinguished family name Dienes were prominent in social, cultural, religious and political affairs in France and New France. Amongst the settlers in North America with this distinguished name Dienes were John Dion who settled in Barbados 1654-1663; Lewis Dion who settled in Philadelphia, Pa. in 1867; Louis G. Dion who settled in Philadelphia, Pa. in 1867.