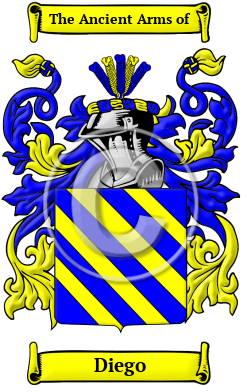 Early Origins of the Diego family

The surname Diego was first found in Castile, where the name originated in Visigothic times.

Early History of the Diego family

This web page shows only a small excerpt of our Diego research. Another 139 words (10 lines of text) covering the years 1056 and 1233 are included under the topic Early Diego History in all our PDF Extended History products and printed products wherever possible.

Spelling variations of this family name include: Díaz, Diaz, Didaz, Díez, Diez, Diz and many more.

Prominent among members of the family were Gonzalo Didaz, son of a Castilian count, whose name appears in a document dated 921; Asur Díaz, Count of Saldaña in 1056; Rodrigo Díaz de Vivar, "El Cid", the legendary hero of the Reconquest; Lope Díaz...
Another 43 words (3 lines of text) are included under the topic Early Diego Notables in all our PDF Extended History products and printed products wherever possible.

Diego migration to the United States +

Diego Settlers in United States in the 19th Century

Historic Events for the Diego family +