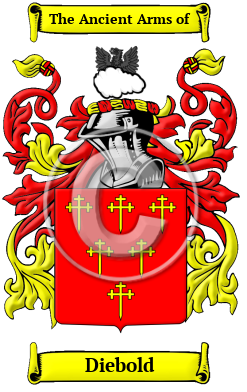 Diebold is an ancient Anglo-Saxon surname that came from the baptismal name Theobald,which was an ancient personal name. After the Norman Conquest, the Old English naming system gradually dissolved. Old English names became less common and were replaced by popular continental European names. The earliest surnames in England were found shortly after the Norman Conquest and are of Norman French rather than native English origins.

Early Origins of the Diebold family

The surname Diebold was first found in the Domesday Book of 1086; several bearers of Diebold as a personal name were recorded as landowners after the Norman Conquest, particularly in Huntingdonshire, Cambridgeshire, and Suffolk. The first recorded instance of Diebold as a surname occurred in 1199, where Tomas Teobald was living in Gloucestershire.

Theobald or Tedbaldus (d. 1161), was Archbishop of Canterbury and came of a Norman family of knightly rank who settled near Thierceville, in the neighbourhood of Bec Hellouin. "He became a monk of Bec between 1093 and 1124, was made prior in 1127, and elected abbot in 1137. The see of Canterbury having been vacant since the death of William of Corbeil in 1136, the prior of Christ Church and a deputation of monks were summoned before King Stephen and the legate Alberic, and on 24 Dec. 1138 elected Theobald archbishop. " [1]

Early History of the Diebold family

This web page shows only a small excerpt of our Diebold research. Another 85 words (6 lines of text) covering the years 1199, 1601, 1688, 1744 and 1760 are included under the topic Early Diebold History in all our PDF Extended History products and printed products wherever possible.

The English language only became standardized in the last few centuries; therefore,spelling variations are common among early Anglo-Saxon names. As the form of the English language changed, even the spelling of literate people's names evolved. Diebold has been recorded under many different variations, including Theobald, Theobalds, Diebold, Theobold, Tubald, Tudball, Dipple, Diebald, Teupel, Diepelt, Dewalt and many more.

Another 46 words (3 lines of text) are included under the topic Early Diebold Notables in all our PDF Extended History products and printed products wherever possible.

Diebold migration to the United States +

For many English families, the political and religious disarray that shrouded England made the far away New World an attractive prospect. On cramped disease-ridden ships, thousands migrated to those British colonies that would eventually become Canada and the United States. Those hardy settlers that survived the journey often went on to make important contributions to the emerging nations in which they landed. Analysis of immigration records indicates that some of the first North American immigrants bore the name Diebold or a variant listed above:

Diebold Settlers in United States in the 19th Century