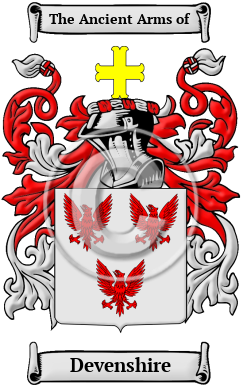 Early Origins of the Devenshire family

The surname Devenshire was first found in Devon at Thorcombe, a parish, and formerly a market-town, in the union of Axminster. It is here that Devonius, or John of Devonshire, chaplain and confessor to King John, was abbot, and, about 1217, was buried in the conventual church. [1] The origin of the place name is indeed interesting. It was originally "called by the Cornish Britons Deunan, apparently from the inequality of its surface; of which name the [Danmonion] and Danmonii of Ptolemy seem to be only modifications. The Welsh termed it Deuffneynt, signifying 'deep valleys,' and, like the former, descriptive of the surface of the county; and a softening of this name with the addition of the word scyre, a share or portion, appears to have produced the Anglo-Saxon Devenascyre, Devnascyre, and Devenschire, in modern English Devonshire." [1] As far as the surname is concerned, the first record was found in Norfolk in the year 1288 when William de Devon held estates in that county. We know he was originally from Devon, but little else is known. From very early times, the name was found in various locals including Kent, Wiltshire, Derbyshire and Cheshire. [2] The name is obviously a "regional name for someone from the county of Devon and is probably originally an ancient British tribal name, from the Old English Defnas, men of Devon, or perhaps from the Latin Dumnonii, meaning 'worshippers of the god Dumnous.' " [3]

Early History of the Devenshire family

This web page shows only a small excerpt of our Devenshire research. Another 85 words (6 lines of text) covering the years 1420, 1455 and 1487 are included under the topic Early Devenshire History in all our PDF Extended History products and printed products wherever possible.

More information is included under the topic Early Devenshire Notables in all our PDF Extended History products and printed products wherever possible.

Migration of the Devenshire family