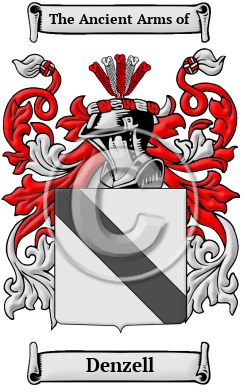 Early Origins of the Denzell family

"This surname is derived from a nickname. 'the damsel'; Old French damoisel, a young squire or page." [2]

The Hundredorum Rolls for 1273 had only one listing, that of Simon Damsell in Buckinghamshire while the Yorkshire Poll Tax Rolls of 1379 had two: Johannes Damysell; and Robertas Damsell. [2]

Early History of the Denzell family

Distinguished members of the family include Sir William Damsell, who was knighted on October 2nd, 1553 at Westminster at the Coronation of Queen Mary in the presence of the Queen by the Earl of Arundel who was commissioned to knight those present. He was Receiver-General of the Court of Wards and Liveries and a Member of Parliament. His family hailed from Devon and he was first elected in the House of Commons of England as a member for Wilton in 1553, and in 1555 returned to represent Arundel. In 1553...
Another 89 words (6 lines of text) are included under the topic Early Denzell Notables in all our PDF Extended History products and printed products wherever possible.

Migration of the Denzell family