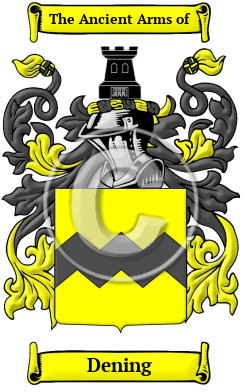 The old family name Dening is thought to have derived from the place name Dunoon (Dunomhainn in Gaelic), located in Argyll and Bute, Scotland, on the Firth of Clyde.

Early Origins of the Dening family

The surname Dening was first found in Ross-shire (Gaelic: Siorrachd Rois) a former county, now part of the Council Areas of Highland and Western Isles in Northern Scotland, which emerged from the Gaelic lordship of the Earl of Ross. Today Dunoon is a town situated on the Cowal Peninsula in Argyll and Bute but was originally a barony in Argyllshire. [1]

Early History of the Dening family

This web page shows only a small excerpt of our Dening research. Another 146 words (10 lines of text) covering the years 1606, 1255, 1265 and 1296 are included under the topic Early Dening History in all our PDF Extended History products and printed products wherever possible.

More information is included under the topic Early Dening Notables in all our PDF Extended History products and printed products wherever possible.

Dening migration to the United States +

Dening Settlers in United States in the 17th Century

Dening Settlers in United States in the 19th Century