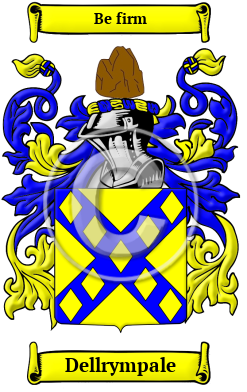 Among the all the peoples of ancient Scotland, the first to use the name Dellrympale were the Strathclyde-Britons. It was a name for someone who lived in Ayrshire (present day Strathclyde region) and comes from the Gaelic "dail chruim puill", which means "field of the crooked stream." Another source claims the translation a little differently: "this place derives its name, in the Celtic language signifying "the dale of the crooked water," from the situation of its village on a bend of the river Doon. " [1]

Early Origins of the Dellrympale family

The surname Dellrympale was first found in Ayrshire (Gaelic: Siorrachd Inbhir Àir), formerly a county in the southwestern Strathclyde region of Scotland, that today makes up the Council Areas of South, East, and North Ayrshire.

Early History of the Dellrympale family

The variation in the spelling of Medieval names is a result of the lack of spelling rules in the English language prior to the last few hundred years. Before that time, scribes spelled according to sound, often varying the spelling of name within a single document. Dellrympale has appeared as Dalrymple, Dalrimple, Dalremple, Dalrympel, Dalrimpel and many more.

Notable amongst the family at this time was James Dalrymple, 1st Viscount of Stair (1619-1695), Scottish lawyer and statesman; John Dalrymple the Master of Stair (1648-1707), a Scottish noble; Sir James Dalrymple, 1st Baronet (1650-1719), a Scottish writer, Principal Clerk of Session; Sir Hew Dalrymple, Lord North Berwick (1652-1737), a Scottish judge and politician, Lord President of the Court of Session (1698-1737); Sir David...
Another 63 words (4 lines of text) are included under the topic Early Dellrympale Notables in all our PDF Extended History products and printed products wherever possible.

Migration of the Dellrympale family to Ireland

Some of the Dellrympale family moved to Ireland, but this topic is not covered in this excerpt.
Another 31 words (2 lines of text) about their life in Ireland is included in all our PDF Extended History products and printed products wherever possible.

Migration of the Dellrympale family

As the persecution of Clan families continued, they sailed for North America in increasing numbers. In most cases, they found the freedom and opportunity they sought. Land was often available and the American War of Independence allowed Scots an opportunity to solidify their independence from the English crown. These settlers and their ancestors went on to play essential roles in the forging of the nations of the United States and Canada. Among them: Archie Dalrymple who settled in North Carolina followed by Mary in 1775; and William in 1775.