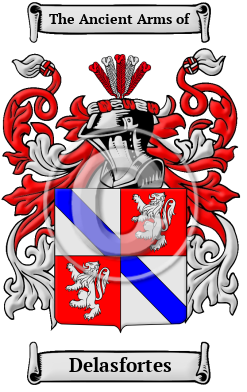 Early Origins of the Delasfortes family

The surname Delasfortes was first found in Gascony (French: Gascogne), an area of southwest France bordering Spain, that was part of the "Province of Guyenne and Gascony" prior to the French Revolution, where this eminent family held a family seat since ancient times.

Early History of the Delasfortes family

Notable amongst the family at this time was Jean de Durfort, Lord of Duras, Blanquefort and Villandrau, Mayor of Bordeaux in 1487, followed Charles VIII in the conquest of the Kingdom of Naples in 1474 and Louis XII to the Duchy of Milan, later to become the Governor of Drême in Lombardie. Louis Durfort or Duras Earl of Feversham (1640?-1709), was a general and the sixth son of Guy Aldonce de Durfort, marquis de Duras, by his wife, Elizabeth, daughter of Henri de la...
Another 83 words (6 lines of text) are included under the topic Early Delasfortes Notables in all our PDF Extended History products and printed products wherever possible.

Migration of the Delasfortes family