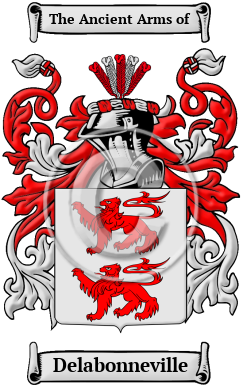 Early Origins of the Delabonneville family

The surname Delabonneville was first found in Normandy (French: Normandie), the former Duchy of Normandy, where the family has been a prominent family for centuries. The Itineraire de la Normandie records three places so called-two near Rouen and the third near Yvetot. The family were well established in the region of Calvados. They held the Castle of Bonneville or Bondeville in Normandy. [1]

Early History of the Delabonneville family

This web page shows only a small excerpt of our Delabonneville research. Another 85 words (6 lines of text) covering the years 1050 and 1450 are included under the topic Early Delabonneville History in all our PDF Extended History products and printed products wherever possible.

More information is included under the topic Early Delabonneville Notables in all our PDF Extended History products and printed products wherever possible.

Migration of the Delabonneville family