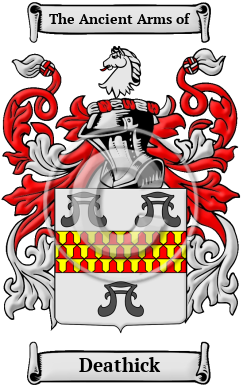 Early Origins of the Deathick family

The surname Deathick was first found in Derbyshire where the family name was first referenced in the year 1273 when Geoffrey of Dethek held estates in that shire. Dethick Manor is a 16th century manor house at Dethick, Amber Valley, Derbyshire.

Early History of the Deathick family

Distinguished members of the family include Sir Gilbert Dethick KT FSA (c. 1510-1584), English officer of arms at the College of Arms in London, Garter Principal King of Arms. "He was probably born in 1519 or 1520, although according to the inscription on his portrait the date is as early as 1500. The Dethicks claimed that they were descended from a family of that name seated at...
Another 67 words (5 lines of text) are included under the topic Early Deathick Notables in all our PDF Extended History products and printed products wherever possible.

Migration of the Deathick family