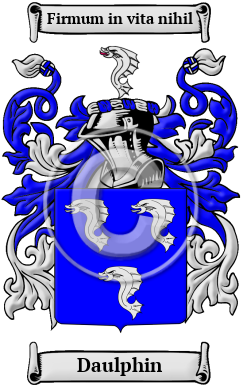 The Strongbownians added their own naming traditions to the eastern region of Ireland to which they arrived. The impact of this new tradition was not extremely disruptive to the pre-existing Irish tradition because the two had many similarities. Both cultures made significant use of hereditary surnames. And like the Irish, the Strongbownians often used prefixes to build patronymic surnames, which are names based on the given name of the initial bearer's father or another older relative. Strongbow's followers often created names that were built with the prefix Fitz-, which was derived from the French word fils, and ultimately from the Latin filius, both of which mean son. They also used diminutive suffixes such as -ot, -et, -un, -in, or -el, and occasionally even two suffixes combined to form a double diminutive such as -el-in, -el-ot, -in-ot, and -et-in, to build patronymic names. The surname Daulphin is derived from the Old Norse personal names Dufan and Dólgfinnr. Many Scandinavian personal names were left in the British Isles as a legacy of the Viking raids which plagued the coastal regions of Britain from the 8th to 10th centuries, and many of these eventually became surnames. In Gaelic, the name was Doilfin.

Early Origins of the Daulphin family

The surname Daulphin was first found in Cumberland at Dovenby, a township, in the parish of Bridekirk, union of Cockermouth, Allerdale ward below Derwent. "This place was called also Dolphinsby, from Dolphin, son of Alward, whose descendants were seated here till the reign of Henry III." [1]

Early History of the Daulphin family

This web page shows only a small excerpt of our Daulphin research. Another 201 words (14 lines of text) covering the years 1068, 1193 and 1606 are included under the topic Early Daulphin History in all our PDF Extended History products and printed products wherever possible.

Medieval scribes and church officials spelled the names as they sounded, so a name was often spelled many different ways during the lifetime of a single person. The investigation of the origin of the name Daulphin revealed many spelling variations including Dolphin, Dolfin, Dalphin, Daulphin, Daulphine, Dolphine, Dolfine and many more.

More information is included under the topic Early Daulphin Notables in all our PDF Extended History products and printed products wherever possible.

Migration of the Daulphin family

During the middle of the 19th century, Irish families often experienced extreme poverty and racial discrimination in their own homeland under English rule. Record numbers died of disease and starvation and many others, deciding against such a fate, boarded ships bound for North America. The largest influx of Irish settlers occurred with Great Potato Famine of the late 1840s. Unfortunately, many of those Irish that arrived in Canada or the United States still experienced economic and racial discrimination. Although often maligned, these Irish people were essential to the rapid development of these countries because they provided the cheap labor required for the many canals, roads, railways, and other projects required for strong national infrastructures. Eventually the Irish went on to make contributions in the less backbreaking and more intellectual arenas of commerce, education, and the arts. Research early immigration and passenger lists revealed many early immigrants bearing the name Daulphin: Richard Dolphin settled in Virginia in 1618. Later Dolphin family members established themselves in Maryland and Pennsylvania in the 1700's.