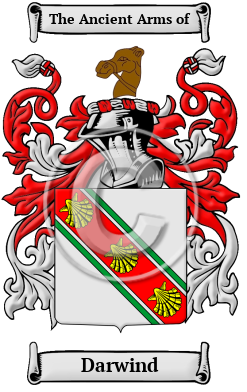 The lineage of the name Darwind begins with the Anglo-Saxon tribes in Britain. It is a result of when they lived beside the river Darwen or Derwent in Lancashire. "Over and Lower Darwen are towns in the ancient parish of Blackburn, Lancashire, so called because located on the small stream the Darwen, a variation of the common river name Derwent. " [1]

Early Origins of the Darwind family

The surname Darwind was first found in Lancashire. The baptismal name Derewen was found in the Domesday Book. [2] One of the first listings of the family was found in Oxfordshire in the Hundredorum Rolls of 1273. Years later the Yorkshire Poll Tax Rolls of 1379 listed: Robertus Darwent and Henricus Darwent, walker. [1]

"The family home of the Darwins in the 17th century was at Cleaton in Lincolnshire, and at Elston in Nottinghamshire. From this stock sprang, last century, the noted Derbyshire Darwins, to which branch Charles Darwin, the great naturalist, belonged. " [3]

Robert Darwin of Elston (1682-1754) was an English physician who discovered the first remains of a Jurassic reptile in 1718 in a stone from a quarry at Fulbeck. He was the ancestor of the famed naturalist Charles Robert Darwin (1809-1882.)

Early History of the Darwind family

Notables of the family at this time include William Darwin (d. 1644) who possessed a small estate at Cleatham, and was yeoman of the armoury at Greenwich to James I and Charles I. His son William (b. 1620) served in the Royalist Army, and afterwards became a barrister and recorder of Lincoln and married the daughter of Erasmus Earle, serjeant-at-law. His...
Another 60 words (4 lines of text) are included under the topic Early Darwind Notables in all our PDF Extended History products and printed products wherever possible.

Migration of the Darwind family

To escape the unstable social climate in England of this time, many families boarded ships for the New World with the hope of finding land, opportunity, and greater religious and political freedom. Although the voyages were expensive, crowded, and difficult, those families that arrived often found greater opportunities and freedoms than they could have experienced at home. Many of those families went on to make significant contributions to the rapidly developing colonies in which they settled. Early North American records indicate many people bearing the name Darwind were among those contributors: Peter Darwin who settled in Barnstable Massachusetts in 1822.