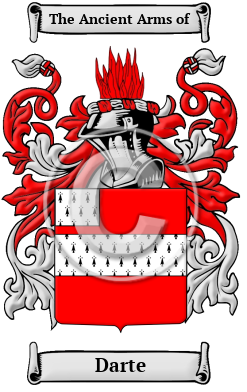 Darte is one of the many new names that came to England following the Norman Conquest of 1066. The Darte family lived in Devon, near the river Dart, from which the surname derives. [1]

Alternatively, the name could have originated from the Old French word "dart 'a pointed missile thrown by hand', perhaps metonymic for a soldier or a hunter." [2]

Early Origins of the Darte family

The family may have given birth to the parish of Dartington, in the union of Totnes, hundred of Stanborough, Stanborough and Coleridge, in Devon, two miles from Totnes [3] which is home to Dartington Manor, an historic hall and country estate of 1,200 acres dating from medieval times. One source claims the manor is "one of the most spectacular surviving domestic buildings of late Medieval England." Today it is the home of the Dartington Trust, which currently runs 16 charitable educational programs, including Schumacher College, Dartington Arts School, Research in Practice and the Dartington International Summer School.

Early History of the Darte family

This web page shows only a small excerpt of our Darte research. Another 129 words (9 lines of text) covering the years 1086, 1730 and 1730 are included under the topic Early Darte History in all our PDF Extended History products and printed products wherever possible.

Anglo-Norman names are characterized by a multitude of spelling variations. When the Normans became the ruling people of England in the 11th century, they introduced a new language into a society where the main languages of Old and later Middle English had no definite spelling rules. These languages were more often spoken than written, so they blended freely with one another. Contributing to this mixing of tongues was the fact that medieval scribes spelled words according to sound, ensuring that a person's name would appear differently in nearly every document in which it was recorded. The name has been spelled Dart, Darte, Darth and others.

Outstanding amongst the family at this time was John Dart (d. 1730), English antiquary, "bred an attorney, but meeting with little success in that profession, he turned to the church as a means...
Another 32 words (2 lines of text) are included under the topic Early Darte Notables in all our PDF Extended History products and printed products wherever possible.

Migration of the Darte family

For many English families, the political and religious disarray that plagued their homeland made the frontiers of the New World an attractive prospect. Thousands migrated, aboard cramped disease-ridden ships. They arrived sick, poor, and hungry, but were welcomed in many cases with far greater opportunity than at home in England. Many of these hardy settlers went on to make important contributions to the emerging nations in which they landed. Among early immigrants bearing the name Darte or a variant listed above were: Ambrose Dart settled in Boston, Massachusetts about the year 1640; and Richard Dart settled in New London in the year 1664; Jane Dart settled in Bermuda in 1635.