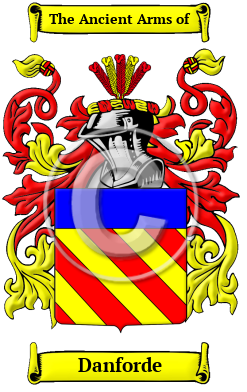 The Danforde surname is thought to have been a habitational name taken on from a place name; possibly from Darnford in Suffolk, Great Durnford in Wiltshire, or from Dernford Farm in Sawston, Cambridgeshire. These place names are derived from the Old English words "dierne," meaning "hidden" and "ford," or in other words "a ford across a river." [1]

Of all these parishes Durnford, Wiltshire is the largest and dates back to the Domesday Book of 1086 when it was recorded as Diarneford. [2] Denford, Northamptonshire was listed in the the Domesday Book as Deneforde. [2]

Early Origins of the Danforde family

The surname Danforde was first found in Northamptonshire at Denford, a parish, in the union of Thrapston, hundred of Huxloe. [3] Upper Denford is a hamlet in Berkshire, England, and part of the civil parish of Kintbury and this may the source of the family too. [4]

Early rolls revealed early spellings used at that time: Nicholas de Darneford in the Hundredorum Rolls of 1279; Robert de Derneforde in the Subsidy Rolls of Suffolk in 1327; and James Danford in Subsidy Rolls for Suffolk in 1568. [5]

Early History of the Danforde family

Spelling variations of this family name include: Danforth, Danford, Danforde, Danforthe, Damforth and many more.

Distinguished members of the family include Samuel Danforth (1626-1674), an American Puritan minister, poet, and astronomer born in Framlingham, Suffolk, arriving in Massachusetts in 1634; and Thomas Danforth (1622-1699), born in Framlingham, Suffolk, he emigrated to New England in 1634 with his family and later became a judge for the 1692 Salem witch trials. He was son of Nicholas Danforth of Framlingham and was "taken by his father to America in 1634, and became an inhabitant of Cambridge, Massachusetts. He was admitted a freeman of that town in 1643...
Another 89 words (6 lines of text) are included under the topic Early Danforde Notables in all our PDF Extended History products and printed products wherever possible.

Migration of the Danforde family