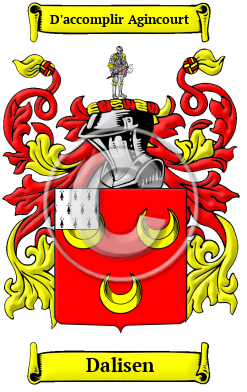 Early Origins of the Dalisen family

The surname Dalisen was first found in Lincolnshire where they held a family seat as Lords of the Manor of Laughton. The family name is conjecturally descended from a Norman Baron who held a family seat at the Norman town of D'Alancon in Haute-Loire, Normandy.

We look to the Domesday Book of 1086 for the first record of the family in England. There we found Bernard de Alencon listed in Suffolk. Over one hundred years later, John de Alecon was listed at Whitby, Yorkshire in 1189.

In the 13th century, Alexander Dalencun and William Dalizun were both listed in Norfolk. The name is thought to have been the source for names like Allanson and Alison. [1]

Early History of the Dalisen family

Outstanding amongst the family at this time was Sir William Dalison (died 1559), an English judge, son of William Dalison of Laughton, Lincolnshire, Sheriff and Escheator of the county. He "entered Gray's Inn in 1534, where he...
Another 36 words (3 lines of text) are included under the topic Early Dalisen Notables in all our PDF Extended History products and printed products wherever possible.

Migration of the Dalisen family