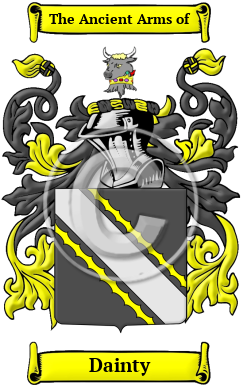 The ancestors of the name Dainty date back to the Anglo-Saxon tribes of Britain. The name is derived from when the Dainty family lived in Daventry, a town in Northants (now Northampton). The place-name was rendered as Daventrei in the Domesday Book, [1] a census and survey taken by William the Conqueror in 1086. The place-name Daventry is derived from the Old English personal name Dafa, and means "tree of a man called Dafa, Dafa's tree." It is interesting to note that the pronunciation of the placename Daventry is not as it would appear. Locals pronounce Daventry as Daintree, giving rise to the many variations of this name that are found. Another source has a different understanding about the origin of the place name. "The British name of this place, Dwy-Avon-Tre, 'the town of two Avons,' from which its present appellation is derived, originated in its situation between the source of the river Leam, which falls into the Western Avon, and the river Nene, anciently styled the Aufona. " [2]

Early Origins of the Dainty family

The surname Dainty was first found in Northampton at Daventry, a market-town, a parish, and the head of a union, in the hundred of Fawsley.

Early History of the Dainty family

This web page shows only a small excerpt of our Dainty research. Another 116 words (8 lines of text) covering the years 1140, 1296, 1400, 1349 and 1373 are included under the topic Early Dainty History in all our PDF Extended History products and printed products wherever possible.

It is only in the last few hundred years that the English language has been standardized. For that reason, early Anglo-Saxon surnames like Dainty are characterized by many spelling variations. As the English language changed and incorporated elements of other European languages, even literate people changed the spelling of their names. The variations of the name Dainty include: Daventry, Daintry, Dainty, Dantry, Dantye and others.

More information is included under the topic Early Dainty Notables in all our PDF Extended History products and printed products wherever possible.

Dainty migration to the United States +

Many English families tired of political and religious strife left Britain for the new colonies in North America. Although the trip itself offered no relief - conditions on the ships were extremely cramped, and many travelers arrived diseased, starving, and destitute - these immigrants believed the opportunities that awaited them were worth the risks. Once in the colonies, many of the families did indeed prosper and, in turn, made significant contributions to the culture and economies of the growing colonies. An inquiry into the early roots of North American families has revealed a number of immigrants bearing the name Dainty or a variant listed above:

Dainty Settlers in United States in the 19th Century

Dainty Settlers in Australia in the 19th Century

Dainty Settlers in New Zealand in the 19th Century

Dainty Settlers in West Indies in the 17th Century