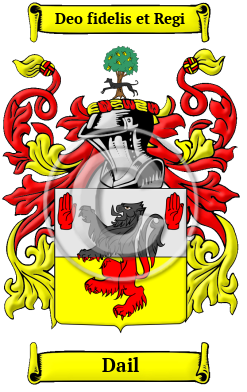 The spelling and overall form of Irish names often vary considerably. The original Gaelic form of the name Dail is O Dalaigh, from the word "dalach," which comes from "dail," which means "assembly."

Early Origins of the Dail family

The surname Dail was first found in the barony of Magheradernon, in County Westmeath and traditionally claim descent from Eanna Ceannselach (Ian Kinsella), King of Leinster. They became Chiefs of Muintir Bhaire in the south west of Cork, and later in the north west of the same county, largely in O'Keefe's country. A distinct sept was found in Desmond as early as 1165.

Early History of the Dail family

The archives that survive today demonstrate the difficulty experienced by the scribes of the Middle Ages in their attempt to record these names in writing. Spelling variations of the name Dail dating from that time include Daly, Daley, Daylie, Dayley, Dalley, Dailey, Daily, Dailley, Dally, O'Daily, O'Daley and many more.

Notable amongst the family name at this time was Daniel O'Daly (1595-1662), Irish diplomat and historian. He was "a native of Kerry, born in 1595, was member of a branch of an Irish sept which took its name from an ancestor, Dalach, in the twelfth century. His family were among the adherents of the Earl of Desmond, who was attainted for having opposed the government of Queen Elizabeth in Ireland, and was killed there in 1583. " [2] Angus O'Daly (d. 1617), was the Irish...
Another 83 words (6 lines of text) are included under the topic Early Dail Notables in all our PDF Extended History products and printed products wherever possible.

In the United States, the name Dail is the 8,069th most popular surname with an estimated 2,487 people with that name. [3]

Dail migration to the United States +

A massive wave of Irish immigrants hit North America during the 19th century. Although many early Irish immigrants made a carefully planned decision to leave left Ireland for the promise of free land, by the 1840s immigrants were fleeing a famine stricken land in desperation. The condition of Ireland during the Great Potato Famine of the late 1840s can be attributed to a rapidly expanding population and English imperial policies. Those Irish families that arrived in North America were essential to its rapid social, industrial, and economic development. Passenger and immigration lists have revealed a number of early Irish immigrants bearing the name Dail:

Dail Settlers in United States in the 19th Century