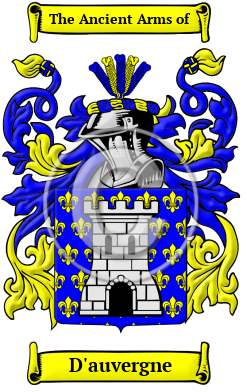 Early Origins of the D'auvergne family

The surname D'auvergne was first found in Dauphiny (French: Dauphiné or Dauphiné Viennois), a former province in southeastern France, where the family has been a prominent family for centuries, and held a family seat with lands and manor. The family were well established in the region of the Rhone and several members of the family distinguished themselves through their contributions toward the community in which they lived and were rewarded with lands, titles and letters patent confirming their nobility.

Early History of the D'auvergne family

Notable amongst the family at this time was Edward D'Auverne (1660-1737), military historian, belonged to the Jersey branch of the D'Auvergne family, claiming descent from a cadet of the house of the last reigning Duke of Bouillon. He was son of Philip d'Auvergne of Jersey, and born in that island. In 1691 he was chaplain to the Scots guards, and served with that regiment throughout the wars in Flanders under William III, of which he became the historian. Afterwards he was made one of the king's domestic chaplains. He died at Great Hallingbury 2 Dec. 1737. [1] Bénigne d'Auvergne de Saint-Mars (died...
Another 166 words (12 lines of text) are included under the topic Early D'auvergne Notables in all our PDF Extended History products and printed products wherever possible.

D'auvergne migration to the United States +

D'auvergne Settlers in United States in the 18th Century

D'auvergne Settlers in United States in the 19th Century