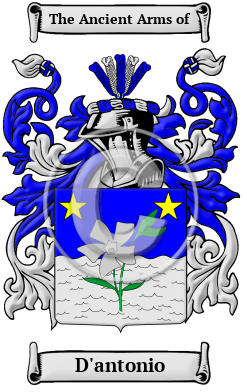 D'antonio is one of the surnames to have emerged from the beautiful and historical Italian region of Tuscany. During the Middle Ages, as populations grew and travel between regions became more frequent, the people of Tuscany found it necessary to adopt a second name to identify themselves and their families. This process of adopting fixed hereditary surnames in Italy began in the 10th and 11th centuries, but it was not completed until the modern era. The patronymic surname, which is derived from the father's given name, was one of the most common names created at that time in the region of Tuscany. The surname D'antonio came from the given name Antonius, which in English is known in the forms Anthony and Antony. The given name Antonius means inestimable or strength. The D'antonio family surname has its roots in the ancient Roman period and possibly earlier, in the Etruscan period. The most famous member of this family is Marc Antony (Marcus Antonius), the famous Roman general, politician and orator born in 83 B.C. Antony was of a distinguished family related to Julius Caesar. After Caesar's assassination Antony aroused the masses against the conspirators who murdered his relative and patron. Perhaps the most memorable aspect of his life was his love affair with Cleopatra, Queen of Egypt. The tragic end of this couple has been the subject of much literature, including one of Shakespeare's plays.

Early History of the D'antonio family

This web page shows only a small excerpt of our D'antonio research. More information is included under the topic Early D'antonio History in all our PDF Extended History products and printed products wherever possible.

Italian surnames have a surprising number of forms in comparison with other European surnames because they reflect the regional variations and the many dialects of the Italian language, each of which has its distinctive features. For example, in Northern Italy the most standard Italian surname suffix is "I", whereas in Southern Italy the most typical surname suffix is "O". Sardinian is very different from other forms of Italian and in fact, it is considered to be its own distinct language. Additionally, spelling changes frequently occurred because medieval scribes, church officials, and the bearers of names, spelled names as they sounded rather than according to any specific spelling rules. As a consequence of the major changes in the Italian language and in the local spellings of Italian surnames that occurred over the course of history, there are numerous variations for the surname D'antonio. These spelling variations include Antony, Anthony, Antni, Antnia, Antnio, Antoni, Antonia, Antonio, De Antoni, Di Antonio, Antonèllo, D'Antonio, Antonello, Antonelli, Antonetti, Antonetto, Antonietti, Antonazzi, Antonazzo, Antoniutti, Antonioli, Antuoni, Antonino, Antonicelli, Antonucci, Antognini, Antognetti, Antognoli, Toni, Tony, Tonelli, Tonicello, Tonello, Tonino, Tonini, Tonizzo, Tonolli and many more.

Prominent among members of the family was Antonia of Baux (c. 1355-1374), the second Queen consort of Frederick III, King of Sicily (1372-1374.) Antonio de Messina, was a painter in Messina, born in 1430. He specialized in still life, his most famous work is "St. Jerome in His Study" which is on display in the art gallery in London England today. Silvio Antonio was a humanist scholar born in...
Another 69 words (5 lines of text) are included under the topic Early D'antonio Notables in all our PDF Extended History products and printed products wherever possible.

In the United States, the name D'antonio is the 14,090th most popular surname with an estimated 2,487 people with that name. [1]

D'antonio migration to the United States +

D'antonio Settlers in United States in the 20th Century