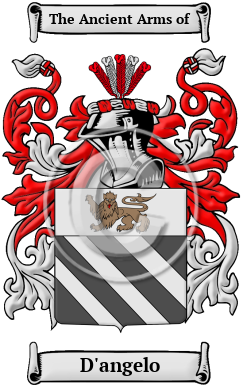 From the historical and fascinating Italian region of Venice emerged a multitude of noble families, including the distinguished D'angelo family. People in this region were originally known by only a single name, but it became necessary for people to adopt a second name to identify themselves as populations grew and travel became more frequent. The process of adopting fixed hereditary surnames began in Italy in the 10th and 11th centuries. D'angelo is thought to have originally been a nickname for the first bearer of this surname. As a nickname, D'angelo most likely described a person who was "angelic," or perhaps a person who acted as some kind of religious messenger.

Early Origins of the D'angelo family

The surname D'angelo was first found in Treviso. anciently Tarvisium, a town in Venetia, capital of the province of Treviso. The cathedral of San Pietro is notable and dates back to 1141. It is classical style with seven domes with works by many notable painters and sculptors. The Piazza dei Signori has many palaces. In the 6th centaur this town was a seat of a Lombard duke. Charlemagne held it. Later it was Venetian. In those ancient times only persons of rank, the podesta, clergy, city officials, army officers, artists, landowners were entered into the records. To be recorded at this time, at the beginning of recorded history, was of itself a great distinction and indicative of noble ancestry.

Early History of the D'angelo family

This web page shows only a small excerpt of our D'angelo research. Another 147 words (10 lines of text) covering the years 1100, 1488, 1764, 1559 and 1652 are included under the topic Early D'angelo History in all our PDF Extended History products and printed products wherever possible.

Surnames that originated in Italy are characterized by an enormous number of spelling variations. Some of these are derived from regional traditions and dialects. Northern names, for instance, often end in "o", while southern names tend to end in "i". Other variations come from the fact the medieval scribes tended to spell according to the sound of words, rather than any particular set of rules. The recorded variations of D'angelo include Angeli, Angelo, Angela, Angioli, Angiolo, Angiola, Agnoli, Agnolo, Agnola, D'Angeli, D'Angelo, D'Angiolo, Angelelli, Angelillo, Angiolillo, Agnorelli, Agnoletti, Angeletti, Angelino, Angiolini, Angolini, Angelucci, Agnolucci, Angelotti, Agnelutto, Agnelut, Angelantoni and many more.

Another 29 words (2 lines of text) are included under the topic Early D'angelo Notables in all our PDF Extended History products and printed products wherever possible.

Migration of the D'angelo family

An examination into the immigration and passenger lists has discovered a number of people bearing the name D'angelo: Cristino Dangelis, who arrived in New York city from Naples on March 22; 1893 aboard the SS Alesia, Josef Angeli, who arrived in Baltimore in 1913; as well as Americo Angeli, who was naturalized in Illinois in 1902.