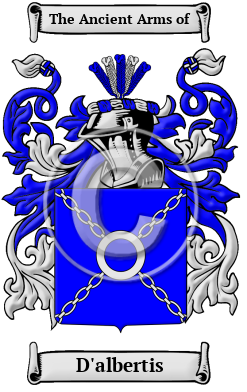 The surname D'albertis came from Alberto which is formed from the words "ala," which means "everything," and "bertha," which means "famous." Thus the name means one who is famous in everything.

Early Origins of the D'albertis family

The surname D'albertis was first found in Bologna (Latin: Bononia), the largest city and the capital of Emilia-Romagna Region, with Leandro Alberto and Oreste degli Alberti in the 13th century. The latter was a famous poet and was a contemporary and friend of Petrarca.

Early History of the D'albertis family

Italian surnames have a surprising number of forms in comparison with other European surnames because they reflect the regional variations and the many dialects of the Italian language, each of which has its distinctive features. For example, in Northern Italy the most standard Italian surname suffix is "I", whereas in Southern Italy the most typical surname suffix is "O". Sardinian is very different from other forms of Italian and in fact, it is considered to be its own distinct language. Additionally, spelling changes frequently occurred because medieval scribes, church officials, and the bearers of names, spelled names as they sounded rather than according to any specific spelling rules. As a consequence of the major changes in the Italian language and in the local spellings of Italian surnames that occurred over the course of history, there are numerous variations for the surname D'albertis. These spelling variations include Albert, Albertazzi, Albertuzzi, Albertis, Albertelli, Albertinelli, Albertini, Alberto, Albertocchi, Albertoli, Albertolli, Alberton, Albertoni, Albertosi, Albertotti, Albertucci, Aliberti, Alierti, Aliverti, D'Albert, D'Alberti, D'Albertis, D'Alberto, DeAlbertellis, DeAlberti and many more.

Prominent among members of the family was Ignazio Albertini (Albertino) (c. 1644-1685) an Italian Baroque violinist and composer; Paluzzo Paluzzi Altieri degli Albertoni (1623-1698), an Italian Catholic Cardinal; Giuseppe Alberti (1664-1716), an Italian painter of the Baroque period; Ludovica Albertoni (1473-1533), sometimes known as Louisa Albertoni or Ludovica Albertoni Cetera, is considered a blessed person, beatified by Pope Clement X; Leon Battista Alberti, born in 1404, who was a famous architect, painter, organist, and writer in Florence. Among his well known architectural works are the church of San Andrea in Mantua, the church of San Francesco in Rimini, and the facade...
Another 119 words (8 lines of text) are included under the topic Early D'albertis Notables in all our PDF Extended History products and printed products wherever possible.

Migration of the D'albertis family