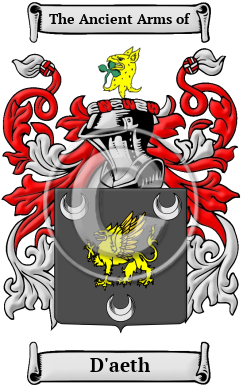 The distinguished surname D'aeth emerged among the industrious people of Flanders, which was an important trading partner and political ally of Britain during the Middle Ages. As a result of the frequent commercial intercourse between the Flemish and English nations, many Flemish migrants settled in Britain. In early times, people were known by only a single name. However, as the population grew and people traveled further afield, it became increasingly necessary to assume an additional name to differentiate between bearers of the same personal name. The manner in which hereditary surnames arose is interesting. Local surnames are derived from where the original bearer lived, was born, or held land. Flemish surnames of this type frequently are prefixed by de la or de le, which mean of the or from the. The D'aeth family originally lived in the town of Ath in Belgium. There it would have been rendered D'Ath, or De Ath, meaning from Ath. It was also occasionally an occupational name for a gatherer or seller of kindling. In this case, the name is derived from the Old English word dethe, which in turn is derived from the Old English word dyth, which means fuel or tinder.

"'Death' was a common character in the medieval mysteries or miracle plays: but this surname is probably derived from a local source." [1]

Early Origins of the D'aeth family

This author postulates that while the Belgium origin is clearly possible, the name was scattered and accordingly could have also have been derived from the occupation, rather than just as a local surname.

"Properly D'Aeth, still an English name, and said to be from Aeth, in Flanders. This may refer to Ath, a fortified town of Belgium, prov. Hainault. The name D'ath is found in the U.S. There is a surgeon and also an undertaker named Death. "At the Liverpool Police-court, on Friday, the witnesses and solicitor in two cases bore the ominous names of Death, Debt, and Daggers" (Morning Star). One family of the name of H. E. Death, having an objection to the name, changed it to Edeath. The U.S. names Date and Datt and the English name Dates may be derived from Death, D'Aeth, or D'Ath." [3]

Early History of the D'aeth family

Flemish surnames are characterized by a large number of spelling variations. One reason for this is that medieval English lacked definite spelling rules. The spellings of surnames were also influenced by the official court languages, which were French and Latin. Names were rarely spelled consistently in medieval times. Scribes and church officials recorded names as they sounded, rather than adhering to specific spelling rules, and people often had their names registered in several different forms throughout their lives. One of the greatest reasons for change is the linguistic uniqueness of the Flemish settlers in England, who spoke a language closely related to Dutch. The pronunciation and spelling of Flemish names were often altered to suit the tastes of English-speaking people. In many cases, the first, final, or middle syllables of surnames were eliminated. The name has been spelled Daeth, D'Aeth, D'Eath, Death, Darth, Dath and others.

Prominent in the family at this time was Sir Thomas D'Aeth, 1st Baronet (1678-1745) of Knowlton in the County of Kent. He married Elizabeth Narborough, daughter of Rear-Admiral Sir John Narborough. Sir John along with his two Narborough stepsons died at sea in the Scilly naval disaster of 1707. His flagship, HMS Association, and three other ships were lost, claiming the lives of nearly 2,000 sailors. Knowlton Church has a memorial to...
Another 72 words (5 lines of text) are included under the topic Early D'aeth Notables in all our PDF Extended History products and printed products wherever possible.

Migration of the D'aeth family