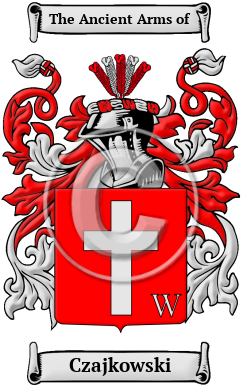 Early Origins of the Czajkowski family

The surname Czajkowski was first found in Cracow a province of Poland which lies centrally, bounded by Kielce, Lublin, Silesia and Lwow The capital city is Cracow, said to be the intellectual center of Poland. The region is composed of Poles and Gorale (Highlanders) who speak their own dialect and wear picturesque costumes. The chief towns of the province are Cracow, Tarnow, and Nowy Sacz. The surname became noted for its many branches in the region, each house acquiring a status and influence which was envied by the princes of the region. In their later history the name became a power unto themselves and were elevated to the ranks of nobility as they grew into this most influential family. They were a part of the major Clan Debno and the first record was in 1482 when Adam Debno Tymkowicz Czajkowic was the major leader of both the clan and the area. The major clan Debno goes back to 1243.

Early History of the Czajkowski family

This web page shows only a small excerpt of our Czajkowski research. Another 85 words (6 lines of text) covering the year 1757 is included under the topic Early Czajkowski History in all our PDF Extended History products and printed products wherever possible.

Spelling variations of this family name include: Czajkowski, Debno, Czaykowski, Czaykowski and many more.

More information is included under the topic Early Czajkowski Notables in all our PDF Extended History products and printed products wherever possible.

In the United States, the name Czajkowski is the 12,865th most popular surname with an estimated 2,487 people with that name. [1]

Czajkowski migration to the United States +

Czajkowski Settlers in United States in the 20th Century