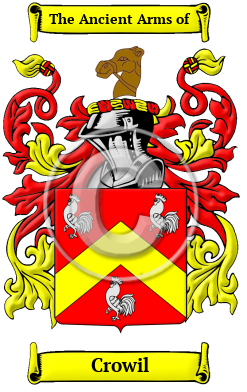 The ancient roots of the Crowil family name are in the Anglo-Saxon culture. The name Crowil comes from when the family lived in either the settlement of Crowell, which is in the county of Oxfordshire, or in the place of the same name in Spofforth in the West Riding of Yorkshire. The latter settlement no longer exists. The surname Crowil belongs to the large category of Anglo-Saxon habitation names, which are derived from pre-existing names for towns, villages, parishes, or farmsteads.

Early Origins of the Crowil family

The surname Crowil was first found in Oxfordshire at Crowell, a parish, in the union of Thame, hundred of Lewknor. However, Walmer in Kent was also home to some of the family since early times. "Near the church is a deep fosse, with other vestiges of ancient intrenchments; and in the churchyard several stone coffins were discovered about 50 years since, supposed to have belonged to the Crowl family, of whom Sir Nicholas, in the reign of Edward I., erected a mansion in the village, of which there are still some remains." [1] The Hundredorum Rolls of 1273 list Robert de Croule in Worcestershire and Richard de Crowell, or Richard de Crol in Lincolnshire. Later the Yorkshire Poll Tax Rolls of 1379 listed Johannes de Crull and Thomas de Crull. [2] Crowle is a small town and civil parish on the Isle of Axholme in Lincolnshire and a parish in Worcestershire. The Crowle spelling of the name is today most numerous in Cornwall.

Early History of the Crowil family

One relatively recent invention that did much to standardize English spelling was the printing press. However, before its invention even the most literate people recorded their names according to sound rather than spelling. The spelling variations under which the name Crowil has appeared include Crowell, Crowel, Croull, Crowill, Crawll and others.

Distinguished members of the family include Alderman George Crowle, English politician, Sheriff of Kingston upon Hull in 1657, and mayor in 1661 and 1679 and his grandson, Richard Crowle, an...
Another 29 words (2 lines of text) are included under the topic Early Crowil Notables in all our PDF Extended History products and printed products wherever possible.

Migration of the Crowil family

At this time, the shores of the New World beckoned many English families that felt that the social climate in England was oppressive and lacked opportunity for change. Thousands left England at great expense in ships that were overcrowded and full of disease. A great portion of these settlers never survived the journey and even a greater number arrived sick, starving, and without a penny. The survivors, however, were often greeted with greater opportunity than they could have experienced back home. These English settlers made significant contributions to those colonies that would eventually become the United States and Canada. An examination of early immigration records and passenger ship lists revealed that people bearing the name Crowil arrived in North America very early: John and Thomas Crowell who settled in Yarmouth around the year 1640; Jane Crowell settled in Virginia in 1635; Michael Crowell settled in Philadelphia, Pennsylvania in 1733.