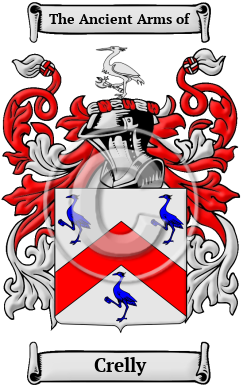 The roots of the Anglo-Saxon name Crelly come from when the family resided in Crawley in the counties of Northumberland, Sussex and Bedfordshire. These place names derive from the Old English word "cra-we," meaning "crow," and "le-ah," meaning a " clearing in the woods." [1]

Early Origins of the Crelly family

Early History of the Crelly family

The English language only became standardized in the last few centuries; therefore,spelling variations are common among early Anglo-Saxon names. As the form of the English language changed, even the spelling of literate people's names evolved. Crelly has been recorded under many different variations, including Crawley, Crawly, Craley, Crally and others.

Notables of the family at this time include Robert Crole, Croleus, Crowley (1518?-1588), English author, printer, and divine, born in Gloucestershire. [4] Sir Francis Crawley (1584-1649), was an English judge, born at Luton, Bedfordshire, on 6 April 1584. "There is no trace of him at the universities, however. He studied law first at Staple Inn and then at Gray's Inn, to which he was admitted...
Another 64 words (5 lines of text) are included under the topic Early Crelly Notables in all our PDF Extended History products and printed products wherever possible.

Crelly Settlers in Australia in the 19th Century