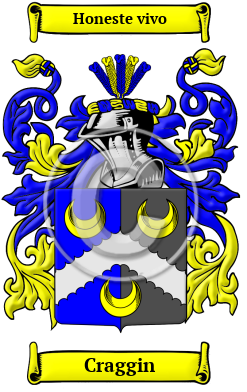 Early Origins of the Craggin family

The surname Craggin was first found in Ayrshire (Gaelic: Siorrachd Inbhir Àir), formerly a county in the southwestern Strathclyde region of Scotland, that today makes up the Council Areas of South, East, and North Ayrshire.

Early History of the Craggin family

Before the printing press standardized spelling in the last few hundred years, no general rules existed in the English language. Spelling variations in Scottish names from the Middle Ages are common even within a single document. Craggin has been spelled Craigie, Craiggie, Craggy, Cragye, Criggie, Cragyn and many more.

Notable amongst the family at this time was Sir William Craigie compiler of the Oxford Dictionary, a man of many words; and Robert Craigie (1688-1760), Scottish Member of Parliament for Tain Burghs (1742 to 1747), Lord President...
Another 37 words (3 lines of text) are included under the topic Early Craggin Notables in all our PDF Extended History products and printed products wherever possible.

Migration of the Craggin family

For Scottish immigrants, the great expense of travel to North America did not seem such a problem in those unstable times. Acres of land awaited them and many got the chance to fight for their freedom in the American War of Independence. These Scots and their ancestors went on to play important roles in the forging of the great nations of the United States and Canada. Among them: James Craigie who arrived in Philadelphia, Pennsylvania in 1729; Margaret Craigie settled in Savannah Georgia in 1774.