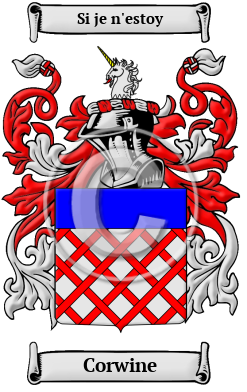 Early Origins of the Corwine family

The surname Corwine was first found in Northumberland where the "Curwens of Workington claim descent from the famous Gospatric, Earl of Northumberland. They 'took that name by covenant from Culwen, a family of Galloway, the heir whereof they had married.' Camden. De Culwen was changed to Curwen temp. Henry VI." [1]

Early History of the Corwine family

Notable amongst the family name during their early history was Sir Henry Curwen; Robert Curwen, a landholder in 1379 in Yorkshire; Sir Henry and Sir Thomas Curwen of Workington Hall; Sir Patricius Curwen, 1st Baronet (c. 1602-1664), an English landowner and politician who supported the Royalist side in the English Civil War; George Corwin...
Another 54 words (4 lines of text) are included under the topic Early Corwine Notables in all our PDF Extended History products and printed products wherever possible.

Corwine migration to the United States +

Corwine Settlers in United States in the 19th Century