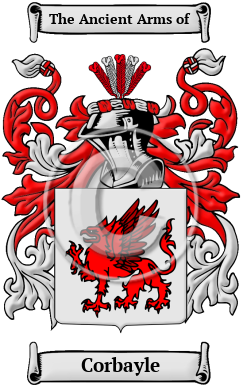 Early Origins of the Corbayle family

The surname Corbayle was first found in Savoy (French: Savoie) in the Rhône-Alpes region of the French Alps, where they held a family seat from the 12th century. One of the earliest records of the name was Gilles de Corbeil (ca. 1140-?), a French royal physician, teacher, and poet. Peter of Corbeil (died 1222), was a preacher and canon of Nôtre Dame de Paris, a scholastic philosopher and master of theology at the University of Paris, ca 1189.

Early History of the Corbayle family

This web page shows only a small excerpt of our Corbayle research. Another 126 words (9 lines of text) covering the years 1220, 1619, 1666, 1699, and 1754 are included under the topic Early Corbayle History in all our PDF Extended History products and printed products wherever possible.

More information is included under the topic Early Corbayle Notables in all our PDF Extended History products and printed products wherever possible.

Migration of the Corbayle family

Some of the first settlers of this family name or some of its variants were: Francis Corbail, aged 36; who settled in New York in 1821. There were Corbeil's that settled in Rivières-des-Prairies during the 1700's and the records show the following marriages: André.