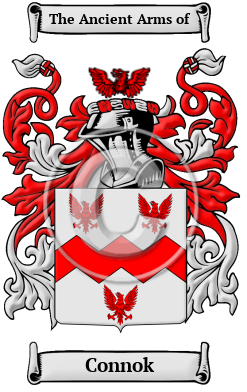 The illustrious surname Connok finds its origin in the rocky, seaswept coastal area of southwestern England known as Cornwall. Under the Feudal System of government, surnames evolved and they often reflected life on the manor and in the field. Nickname surnames were rare among the Cornish, they did occasionally adopt names that reflected the physical characteristics or other attributes of the original bearer of the name. The name Connok is a nickname type of surname for a rich and successful person. Looking back further, we find the name Connok was derived from the Cornish word connock, of the same meaning.

Early Origins of the Connok family

The surname Connok was first found in Cornwall where "the manor of Hagland, [in the parish of Liskeard] which is situated almost wholly within the precincts of the borough, and which is said to have belonged to a chantry chapel at Launceston, was for many generations the property of the Connocks. It is now vested in Mrs. Arminel Inch and her sister, as devisees of the late Mr. Connock of Treworgy." [1]

Early History of the Connok family

Notable amongst the family at this time was John Conock of Treworgie; John Connock, an English politician who sat in the House of Commons at various times between 1554 and 1571; John Connock (1631-ca.1675), an...
Another 34 words (2 lines of text) are included under the topic Early Connok Notables in all our PDF Extended History products and printed products wherever possible.

Migration of the Connok family

Some of the first immigrants to cross the Atlantic and come to North America carried the name Connok, or a variant listed above: John, Patrick, and Walter Connick, arrived in Philadelphia in 1853.