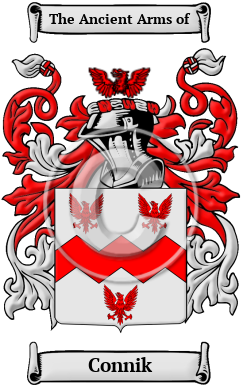 The birthplace of the surname Connik is Cornwall, a rugged peninsula in southwestern England that is noted for its strong Gaelic traditions. Even though the usage of surnames was common during the Middle Ages, all English people were known only by a single name in early times. The process by which hereditary surnames came to be used is intriguing. As the number of inhabitants of Europe swelled, people began to assume an extra name to avoid confusion and to further identify them. Under the Feudal System of government, surnames evolved and they often reflected life on the manor and in the field. Although nickname surnames were rare among the Cornish, they did occasionally adopt names that reflected the physical characteristics or other attributes of the original bearer of the name. The name Connik is a nickname type of surname for a rich and successful person. Looking back further, we find the name Connik was derived from the Cornish word connock, of the same meaning.

Early Origins of the Connik family

The surname Connik was first found in Cornwall where "the manor of Hagland, [in the parish of Liskeard] which is situated almost wholly within the precincts of the borough, and which is said to have belonged to a chantry chapel at Launceston, was for many generations the property of the Connocks. It is now vested in Mrs. Arminel Inch and her sister, as devisees of the late Mr. Connock of Treworgy." [1]

Early History of the Connik family

Notable amongst the family at this time was John Conock of Treworgie; John Connock, an English politician who sat in the House of Commons at various times between 1554 and 1571; John Connock (1631-ca.1675), an...
Another 34 words (2 lines of text) are included under the topic Early Connik Notables in all our PDF Extended History products and printed products wherever possible.

Migration of the Connik family

Study of Passenger and Immigration lists has revealed that among early immigrants bearing the Connik surname were: John, Patrick, and Walter Connick, arrived in Philadelphia in 1853.