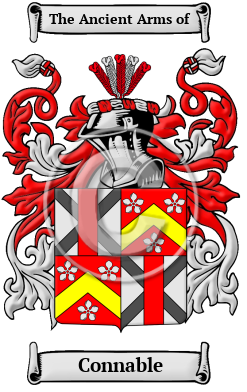 Early Origins of the Connable family

The surname Connable was first found in Devon where they held a family seat at Collibear, a hamlet in the parish of Tawstock. "The change from 'i' to 'y' is common; compare bannister and baluster. This is a familiar Devonshire name." [1]

Early History of the Connable family

Notables of the family at this time include John Coneybeare (1692-1755), Bishop of Bristol, born 31 Jan. 1691 at Pinhoe, near Exeter, of which place his father...
Another 27 words (2 lines of text) are included under the topic Early Connable Notables in all our PDF Extended History products and printed products wherever possible.

Migration of the Connable family