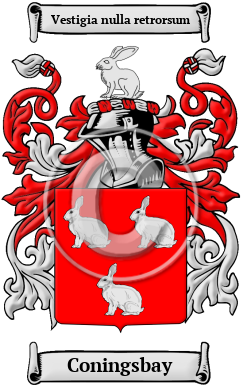 Early Origins of the Coningsbay family

The surname Coningsbay was first found in Lincolnshire where they originated at Coningsby, a village and civil parish 8 miles north of Horncastle. Literally, the place name means "the king's manor or village," from the Old Scandinavian words "konunger" + "by." [1] The parish dates back to the Domesday Book of 1086 when it was listed as Cuningesbi. [2]

Early History of the Coningsbay family

Outstanding amongst the family at this time was Sir William Coningsby (d. 1540?), judge, second son of "Sir Humphrey Coningsby (who figures as a pleader in the Yearbooks from 1480, was appointed serjesnt-at-law on 9 Sept. 1495, king's serjeant on 30 Oct. 1500, a puisne judge of the king's bench on 21 May 1509, was knighted then or shortly afterwards, and was still living and on the bench in 1527)." [4] Sir Thomas Coningsby (died 1625), was an English soldier and Member of Parliament, notable for his diary of military action in France in 1591; Humphrey Coningsby (born ca. 1623), an...
Another 142 words (10 lines of text) are included under the topic Early Coningsbay Notables in all our PDF Extended History products and printed products wherever possible.

Migration of the Coningsbay family