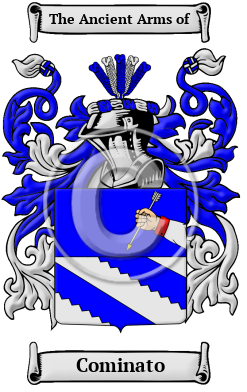 The surname Cominato is thought to be a local name; that is, a surname derived from a place-name where the original bearer once resided or held land. Often Italian local surnames bore the prefix "di," which signified emigration from one place to another, but did not necessarily denote nobility. The Cominato family most likely took on this surname from the city of Como, in Lombardy. The name Como is also thought to have been a shortened form of the name Giacomo, the Italian equivalent to James.

Early Origins of the Cominato family

The surname Cominato was first found in at Como, a city and comune in Lombardy, Italy, the administrative capital of the Province of Como. It was originally a Roman colony, was home to Bishop Saint Felix of Como (d. ca. 390 AD,) and later became an independent commune. The first of the name on record appears to be Elia Como of Padua province, who was the mayor of Castelbardo in 1489.

Early History of the Cominato family

This web page shows only a small excerpt of our Cominato research. Another 36 words (3 lines of text) covering the years 1601, 1507, 1550, 1606 and 1750 are included under the topic Early Cominato History in all our PDF Extended History products and printed products wherever possible.

Prominent among bearers of this family in early times was Girolamo Comi, a painter born in Modena in 1507, whose works can still be seen today in London, Milan, and around Italy; Antonio Cometto and Domenico Benedetto Cometto, brothers and prominent architects from Ticino, around 1550; Leonardo...
Another 47 words (3 lines of text) are included under the topic Early Cominato Notables in all our PDF Extended History products and printed products wherever possible.

Migration of the Cominato family