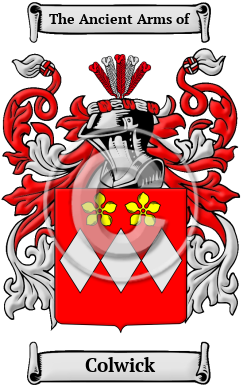 Early Origins of the Colwick family

The surname Colwick was first found in Staffordshire at Colwich, a civil parish and village which dates back to 1240 when it was first listed as Colewich. The place name literally means "building where charcoal is made or stored," from the Old English word "col" + "wic." [1] Today the parish includes the villages and hamlets of Colwich, Great Haywood, Little Haywood, Moreton, Bishton, and Wolseley Bridge. Colwick Hall was an English country house in Colwick that dates back to an early reference on the death of William de Colwick in 1362, when it passed by the marriage of his daughter Joan to Sir Richard Byron. Alternatively, Colwick in Nottinghamshire may hold the origins of the surname. In this latter case, the surname was descended from the tenant of the lands of Colwick, held by Waland from William Peverel, the natural son of Duke William of Normandy by Maud and who was recorded in the Domesday Book census of 1086.

Early History of the Colwick family

This web page shows only a small excerpt of our Colwick research. Another 84 words (6 lines of text) are included under the topic Early Colwick History in all our PDF Extended History products and printed products wherever possible.

More information is included under the topic Early Colwick Notables in all our PDF Extended History products and printed products wherever possible.

Migration of the Colwick family