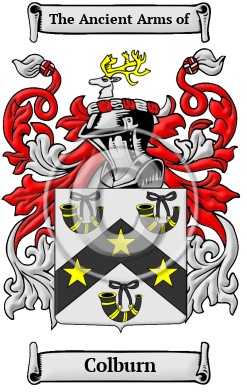 The Anglo-Saxon name Colburn comes from when the family resided in Colbourne, a township in the parish of Catterick in the North Riding of Yorkshire. [1] It is from the place-name that the family name is derived. [2] [3]

Early Origins of the Colburn family

The surname Colburn was first found in Yorkshire where one of the first of the name on record was Geoffrey de Colebrunn in 1208 who held estates in the North Riding of Yorkshire in the parish of Catterick. Later, William de Colburn was listed as a Freeman of York in 1386. [6]

Early History of the Colburn family

Before English spelling was standardized a few hundred years ago, spelling variations of names were a common occurrence. Elements of Latin, French and other languages became incorporated into English through the Middle Ages, and name spellings changed even among the literate. The variations of the surname Colburn include Colburn, Colburne, Colborne, Colbourne, Coulbourne, Colbourn, Cullburn, Colborn, Colbryn, Coulbryne, Culbourne, Cullburne and many more.

Notables of the family at this time include Prisca Coborn (1622-1701) an English wealthy widow of a brewer, who established the Coopers' Company and Coborn School, a coeducational school in Bow in 1701. Sir John Colborne, first Baron Seaton (1778-1863), general, only son of Samuel Colborne of Lyndhurst, Hampshire, was born there on 16 Feb. 1778. He entered the army as an ensign in the 20th regiment on 10 July 1794, and won every step of promotion without purchase. He was promoted lieutenant on 4 Sept. 1795, and captain-lieutenant on 11 Aug...
Another 90 words (6 lines of text) are included under the topic Early Colburn Notables in all our PDF Extended History products and printed products wherever possible.

In the United States, the name Colburn is the 2,918th most popular surname with an estimated 9,948 people with that name. [9]

Colburn migration to the United States +

Colburn Settlers in United States in the 17th Century

Colburn Settlers in United States in the 18th Century

Colburn Settlers in United States in the 19th Century

Colburn Settlers in United States in the 20th Century

Colburn Settlers in New Zealand in the 19th Century

Suggested Readings for the name Colburn +